But Claire it is Only July I hear you shout. Yes well that is the second half of the year!!!! This adorable scene card used the new release from Crafty purple Frog called Rockin Robin and I have taken inspiration from lesson 5 of the Sandy Allnock Copic Enchantment Course 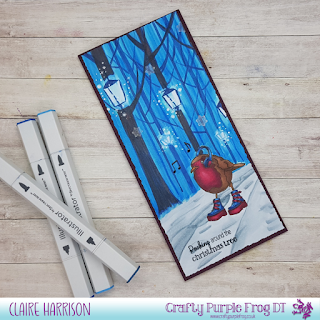 There is no video and no pictures I am afraid I as coloured this sat watching a film with my daughter, I coloured she sketched, we talked and neither of us really had any idea what happen in the film. But sometimes when there is no eye contact and your hands are busy their little minds start to talk and they really open up. Alas I digressed

To begin I stamped my image in the memento dew drops angel pink. This allowed me to line up where to add the accessories knowing that it was a light enough colour that my markers would cover it later.

Using the Spectrum Noir Finesse I stamped the boots and masked them. I used the same technique with the ear phones and then stamped Mr Robin in the darker ink

I begun by creating the background using

Thank you so much for reading

- July 08, 2021
Email ThisBlogThis!Share to TwitterShare to FacebookShare to Pinterest